Stories of Dark Matter: Recipe for losing and against

It is hard to define the precise moment when things turned sour. The dramatic moment must have been somewhere among the events that drew a perfect arch from the courageous decision after excited discussions, then the experiments all the way down to bitter failures, desperate trials with a not-so-happy ending with the final product. 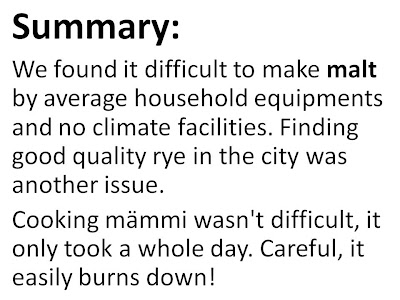 Courageous in the sense, that practically no-one in Finland makes mämmi at home. And as all wannabe-conquerors in history, we marched ahead to the uncharted territory and gathered as much information as possible. We watched online videos, borrowed the only available Mämmi cookbook, searched for the best ingredients, and devoted all the time we deemed necessary. And it wasn't always enough.

Quality and quantity
Finding the proper, untreated rye was tricky, as in most agriculture or garden centers seeds are treated pre-sowing with chemicals. Finding just a small quantity of rye was hard, too. We ended up in funny situations explaining several times that we are not farmers, nor involved in rye production, and we have nothing to do with a John Deer tractor.

We found it interesting to note some emotions on the faces that seldom betray Finns with expressions. After mentioning the propose of this hustle (namely: mämmi making), people dropped their jaw. What a surprise! Mämmi at home, and not from the shop? Wise Finns forgot about the practice of a great tradition, or this is the prelude to some horribly complicated recipe?

Round 1: After days of search, we found a store that sells organic food (Ruohonjuuri), including rye. Some members of the PaP (Porridge and Potatoes) Team have experience in agriculture, so it was easy for us to point out the low quality of rye we bought.

A large fraction of seeds was broken or damaged. When the tips are missing there is no chance for germination! So, to get rid of the broken ones we sorted them out manually. (Just imagine someone picking grains of rye!) After two days the room was filled with "stench of mice poo" and some dark fungal disease was apparent, too.

Round 2: After the failure of the organic rye, we took hold of some rare items: rye from the university's agriculture faculty. The grains look healthy and smelled fine. We are not splitting hairs if we note some flaws here. cc. 10% of total grain was either damaged or belonged to other plants (Jeez, great there was no Coco de Mer, with seeds heavier than 15kg...). Chaff and untreshed seeds were frequent, too. It took 3 hours to clean all these away and get 500g of clean rye.

This is the path to win, so we thought. The key event is germination which occurs at constant 17.5 Celsius. This is colder than an average room temp, and much warmer than the outside temp. All in all, we failed again. Given the lack of air conditioning devices, we opened the windows and adjusted the heating, all for vain. Despite all efforts, the seeds were kept in a wet and relatively warm environment. The same conditions are perfect for fungi that arose almost immediately on the seeds, making them inedible. We repeated this germinating process - and failed miserably - five times.

Cooking
Luckily, rye malt is available in shops of Finland. For good reason, as it seems. The long process of cooking and baking mämmi has been described by many media, and we were able to produce nice results, too.

Final notes of Ildikó:
Finally, we did it, but the cooking process contained many critical steps. One would think the messy kitchen caused the biggest problem. Negative. The whole process takes 10-12 hours, during which you keep on repeating the same step 5-6 times. At the end comes the nightmare: boiling the porridge. You must be careful, as it burns down easily... VERY easily!

My best advise: If you start to boil the porridge, boil it over hot water! You can probably avoid burning it down if you keep the pot with the porridge away from direct contact with the heating surface.

So, spare the biggest pot for the water, not for the porridge. Otherwise you'd be in trouble! :)