Meanwhile we observe Finnish food and eating habits we are equally keen on learning about the "new meat" grown from stem cells without killing a single animal. Since we cannot afford to buy artificial meat (it'd be hundred thousands of Euros for a kilo), we looked around the market to find non-meat protein sources. In the next P.a.P. tasting we provided tofu, tempeh, seitan and Quorn for closer inspection.


THE PRODUCTS
Tofu is made by coagulating soy milk then pressing the curd into white blocks. Typical ingredient of many Asian cuisines. An ancient food, it was invented some 2000 years ago in China. Tofu has low calory count and relatively high protein content. Read more about tofu.

Tempeh is another traditional, yet not very ancient soy product from Asia, more precisely from Indonesia. Soy beans go through fermentation by using Rhizoporus fungi that "binds" soy beans together thus resulting a firm block and earthy taste. Other legumes (pea, lupin, etc) may also be used for tempeh. Readily edible, but the net has many recipes showing various usages of tempeh. Read more about tempeh.

Seitan or "wheat meat" is basically gluten, the protein abundant in cereals (wheat, rye, etc). To make seitan white flour dough is washed until all starch has dissolved leaving the insoluble protein as an elastic mass. Rich in protein, because it's basically nothing but protein. Cook or fry before eat it. Read more about seitan.

Quorn is a new invention, a high-tech food created just a few decades ago to tackle the protein hunger of  the ever growing human population. It is based on mycoprotein (protein gained from fungus) and designed so that it resembles (in structure, color and smell) to real meat. It is available in many forms and tastes in the EU and US. Quorn is a registered trademark of Marlow Foods. Read more about Quorn.

THE TASTING
We were all keen on trying these foods as all except one had never tried most of them, except perhaps the tofu. 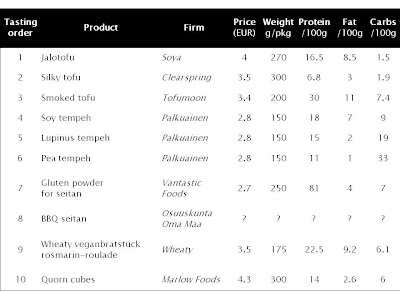 In short, the more it tasted like meat the more people liked it. We can't help it, most of us were carnivores. Check out the results in the prezi below! 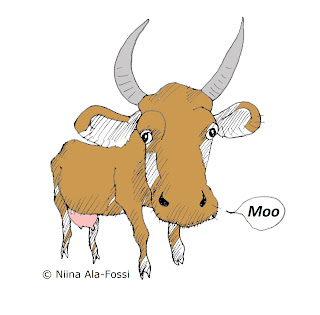 Artificial meat is a product grown in controlled environment (laboratory) and has never been a part of a live animal. The muscle tissue is created from stem cells harvested from live cattle. In 2004 John F. Vein filed  a patent for in vitro meats for human consumption in the US, while research in the Netherlands resulted the first beef patty made of lab grown beef. The first artificially grown beef burger will be cooked and sold in London in the near future. Although the price of the first lab burger is over 300 000 Euros, we predict a bright future for the technology.
Together with our Hungarian partner group we surveyed Finnish and Hungarian people to discover the public's opinion about artificial meat. Also, we assessed information on potential environmental and health impacts of the new technology to compile an article of the issue. That article is in the pipe, we'll announce it when ready.
The basics are shown below in our new Prezi: